Home News and Events What is possible with God - St Thomas, Swansea

What is possible with God - St Thomas, Swansea

Our third news story looks at what is possible with God.

St Thomas is based in one of poorest areas of Swansea. But driven by a strong vision for community transformation the PCC has raised over £1.1million pounds to transform its building, employ new staff and reach out to its community and wider area. Vicar Steve Bunting tells the story of the birth of this resource church.

It started with a quinquennial inspection in 2014. It made it clear that we had to do something with the building. There was either 20 years of piece meal fixes for a building open an hour a week or we needed a more radical response. And so the journey to rethink St Thomas’s began. In 2016 we invited the architects from the Church Resource Trust to help us consider what was possible. We had a big vision for the building, involving worship space and a community hub. However, the architect had a far bigger vision and challenged us about whether we believed the church could grow numerically in a significant way.

For us this wasn’t about having a nice building, we had always been focused on our community and this presented an opportunity to further engage with that community. We were already running youth groups, baby basics, foodbank and night shelter. But we still had our largest building only open an hour a week.

Three designs were drawn up. One was the original plan of worship space plus community hub, the second and third plans involved the creation of a second floor to retain a fullsized worship space. The PCC unanimously chose the most radical option because they believed that it would have the most long term impact on the community 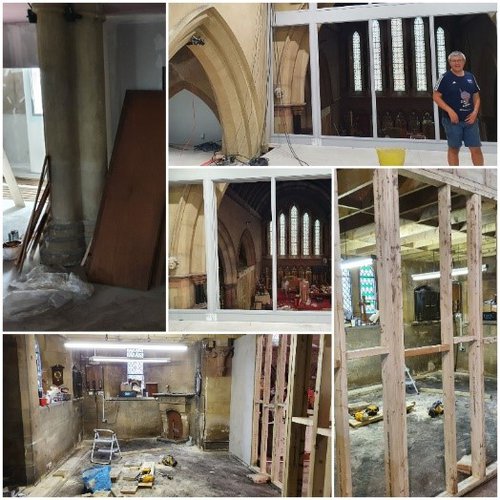 So the external work began in 2018 to establish the fabric of the building and the internal work began in November 2019. The plan is to reopen the building with a full length upstairs worship space with the capacity to seat just over 300 people, with of course, the necessary lifts to ensure accessibility. Downstairs will hold baby basics, night shelter, foodbank, training kitchen (teaching people to cook), a café with commercial catering options and also the ability to produce school holiday meals, community cinema, will act as a hub for the TLG mentoring programme, as well as offices for the slightly expanded staff team, meeting rooms and opportunity for conferences & wedding receptions.

The dream is that the newly refurbished St Thomas Swansea will act as a resource church from which a range of training events, discipleship programmes and mentoring schemes can be established to bless the Swansea area and beyond. The church is based in one of the poorest parts of Swansea, but, has nevertheless raised the £1.1million to make this dream a reality. The relaunch is scheduled for September 2020.