Home News and Events A Week of International Worship

A Week of International Worship

On 13-15 January, our Worship Group in the fulltime community decided to run with the theme of the Anglican Communion for our collective worship. It’s easy to forget that as Anglicans we are part of something bigger than the Church in Wales and so we wanted to heighten our awareness of our Anglican brothers and sisters around the world, as well as celebrate the mix of cultures and voices that make up the Kingdom of God.

Our aim was to avoid appropriation and worship tourism. We wanted to open a window of understanding that would enable us to feel more connected with our spiritual neighbours, with God and hopefully with ourselves. It was important that we chose countries we had real connections with so that our offering of worship would have a genuine flavour of the place in a way that we, at home, on Zoom could connect with.

We decided that we would focus on New Zealand, Tanzania and South India and as the focus was communion, we all opted for something that was relational and people focussed.

I have family in New Zealand, and felt that I wanted to bring something of their Maori culture both as a gateway to worship God and to bring some understanding of their culture and foster a feeling of communion. The service was multilingual, English, Maori and Samoan. I was careful to ensure that anything in a different language was accessible and participatory – either through familiarity or translation.

I found a great video to include on TikTok which was a day in the life of a vicar in New Zealand. It was fun to see what was both familiar and different (including carols being sung in the summertime!) 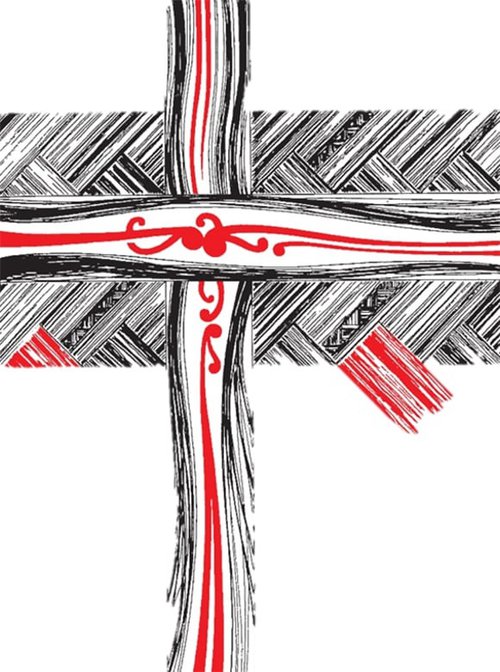 Part of their spirituality is an understanding of the love that goes forth and the love that comes back and how that fosters community and interdependence. I read a reflection written by Archbishop David Moxon called The Woven Flax Cross which expresses this idea in context.

To try and show this concept in action we listened prayerfully to The Blessing New Zealand and having been blessed we returned the love by praying the words back over the people of New Zealand. The service ended with Stan Walker singing Ma Te Marie over us in Maori meaning that our love was returned back thus promoting the cycle of mutual care and blessing.

I chose to celebrate the people and culture of Tanzania. East Africa is a region which holds particular spiritual significance to me, as well as occupying a large place in my heart and prayer life. To open this love up to comprise the full-time community was such a joy and put the vastness of the Anglican Communion into a whole new perspective. Often only referred to in the context of aid, climate disaster or global poverty, I wanted to challenge our traditional perceptions of the African Church through a lens of celebration and the sound of many voices rising together to God in prayer. 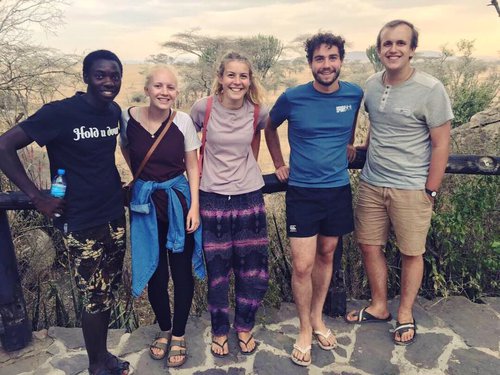 My time in Tanzania was marked by community, sharing and overflowing joy – these three facets shaped how I facilitated the worship, hoping that as we came together these glimmers of the heart of God would touch and inspire others. Enlightened by passages from Revelation 21 and Revelation 7, our prayers were influenced by the diversity and beauty within the “multitude of nations” in the Kingdom of God. We were able to pray for needs of the country nationally alongside the local church and communities within the Mara Region, thanks to my close friend Amos who spoke on behalf of his country and people. His piece to camera was so valuable as it added such authenticity to share in his lived experience. For me, the most poignant moment of the service was hearing that Amos and his community were also making time to pray for us. Not only was this humbling but also showcased the fullness and “shalom” of what it truly means to be children part of God’s family. In the spirit of celebration, our time of worship ended with the Lord’s Prayer sung in Swahili “Baba Yetu” - performed live at the Llangollen International Eisteddfod for the “Calling All Nations” performance. It comprised the Welsh National Opera Orchestra, Celebration Chorus and Kwa-Zulu Natal Youth Choir and was truly a snapshot of heavenly jubilation. 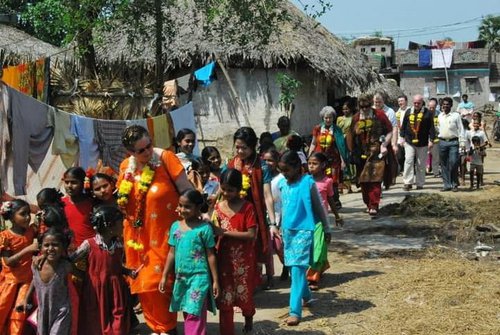 I fell in love with India 10 years ago on the first of two short-term mission trips. I have returned twice since and have a strong connection with Thomas, Mercy and family, who joined us by video. The Church of South India’s liturgy reflects the fact that the Church came into being after India’s independence in 1947, joining together Anglicans, Methodists, Congregationalists, and Presbyterians. Whilst it has an Anglican structure, the words echo not only the different denominations, but the culture of India itself.

We shared the Peace with a gesture of Namaskara. Mercy read from 2 Chronicles 7: 14-15, which is a call to prayer and repentance. Thomas prayed a heartfelt prayer full of praise and thanks to God, and love and compassion for his country and its people. Mercy and the children prayed the Lord’s prayer in their native Telugu. They prayed repeating line by line, as in their rural church they have no prayer books or technology. The closing video of The Blessing brought together Christians from all over India, singing in their own languages.

Our week of worship was colourful, vivid, creative and captured new parts of the worship experience as it played with language, sound, prayer forms and cultural boundaries. It was a privilege to pray alongside our global neighbours, lifting the needs of the world to God but also to broaden our own horizons. Having such variation in the countries chosen and styles of leading also gave us each an insight into the nuanced ministries and callings within our own vocations, which again displayed the diversity in the full time community. It felt exciting and fresh to allow our offerings to God to take their place alongside the symphony of others across the Communion. Whilst Zoom worship in some ways has been challenging, this experience truly exemplified the privilege of being able to connect, to pray and to worship Jesus in more far reaching and uninhibited ways through online mediums. Hearing new languages, being introduced to new faces and allowing the Holy Spirit to lead us into a different space of prayer was both a moving and empowering moment.